I shared in this post that I wanted to challenge myself to go to the gym 30 times between February 26 and April 8. I met with a personal trainer in mid-February who drew up a plan for me – 5 workouts a week: 2 upper body, 2 lower body, and 1 full body. The upper and lower body workouts are a little over an hour; the full body is a 2-mile run and time will vary.

I had originally planned to do a big post after 30 days, but by the third day, I needed something more than a lengthy goal, so I thought it would be good to check in after the first week and sum up what the first five days (does anyone remember that song The First Five Times?) were like. Day 1 was upper body. It started with a 20-minute run/walk and then moved on to mostly free weights. I felt energized and excited when I was done, but by 2pm I was basically toast. It was really hard to fight the urge for an additional cup of coffee.

I did not allow enough time for everything that was included, so there was a circuit of three things that I was supposed to do three times that I only did one time.

Summary: I need more time than I think because not feeling rushed is important to me when I’m learning something.

Day 2 was lower body, which still involved a lot of free weights. I’m really grateful that this plan doesn’t have me tied to a million machines. That morning, I noticed that I was, again, the only woman in the gym that early. Maybe because where I go is small? I was feeling a little achy from the day before, and I need to get better about allowing time to stretch both before and after.

The last exercise was dumbbell lunges and y’all… I barely made it through the first 10. I did a second rep of 10 and stopped, and didn’t do the third rep. I felt terrible for not completing it – when it was about not having enough time that made sense to me, but when it’s because my body can’t? That’s not something I’m used to. I felt kind of crumby for most of day two.

Summary: New disappointments are harder to navigate than ones I’m accustomed to. By day 3, I wasn’t entirely sure why I was still going. It’s been freezing cold here (in Michigan) and my car doesn’t heat up quickly so I leave for the gym freezing cold. I had class the night before so I didn’t get home until 9pm, which means I wasn’t even relaxed (let alone asleep) until around 10:30pm. That 5am wake up was basically impossible. I was grumpy and decided I was just going to do the full-body workout – the run.

Over the summer, I was running a little over a 5K (3.8 miles – the distance to my parents house) in 43 minutes. When I was at 15 minutes for 1 mile, I was ready to just throw the towel in.

Y’all this is the real – I’m giving it to you straight. Wouldn’t it be boring to hear another “exercising is the greatest thing ever! I love every minute of it!” I’m not going to lie. Working out does make me feel better but the process this day was crap.

Until I hit 1.5 miles. I told myself, “1.5 miles is 75%. If you got a 75% in your class, you would be doing all the extra credit in the world.” So, I kept going because I don’t actually like to do things half-assed. And it was a shitty half a mile, but the music was great and I felt better all day knowing that I had kept going.

Summary: When everything sucks, make sure you have good music because then it will suck less. Also, sleep is really important.

Y’all, I couldn’t do Day 4 after what Day 3 was like. And I don’t mean that to be that I was giving up. I knew I wanted to keep going, but also that my mind wasn’t in the right spot for it. So, I decided on Day 3 to commit to at least one day of rest.

It was less rest-y than probably most days: my parents hired me to put in new flooring in their office. So, I pulled up carpet. And tack strip. And 10,000 staples. It was a workout all its’ own. I got home late (around 7pm) and tried to take some quiet moments for myself. My body was grateful for a long shower and some time in a big, comfy chair.

Summary: Rest is far more important than I usually allow it to be in my life.

It was nice to do that on a day not in the gym because I think it set me up well for Day 4 – I highly recommend giving that a shot!

Summary: If I make it less about this idea of going to the gym and more about the idea of learning about my body, I have a better attitude. 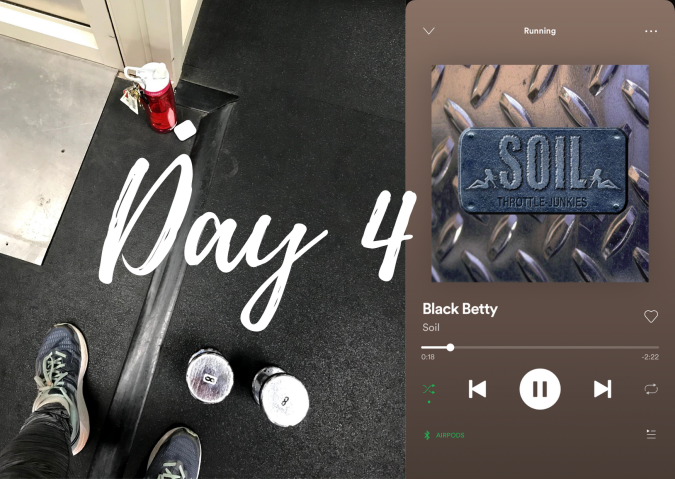 Day 4 felt like Day 1 in terms of my attitude. How crazy that I so seriously needed those rest days?? It was more mental than anything. I was doubting my abilities and feeling overwhelmed without realizing that was what I was feeling. Does that ever happen to you with things like this?

This was the second upper body workout and it also started with 20 minutes of running. I felt like I had better endurance on this day than I did on Day 1, which propelled me forward in a great way. The rest of the time was spent mostly with free weights and a handful of machines.

The only struggle I found myself having was that I wore leggings with no pockets, so I didn’t have a spot for my phone and headphones, so I carried them from spot to spot. Which was just annoying, not like, a serious problem.

I’m doing a no-spend week, but I think I might purchase one of those earbud cases that hooks to your keys when I have the chance to spend again. Or I might just actually purchase a second pair of leggings that have a pocket. I should update y’all on the status of my closet because there have been some major changes since the last time I posted about it.

Summary: I really like upper body workouts and never knew that before.

Day 5 was a leg day and the day of my biggest revelation. I don’t hate leg day (I feel like that’s a thing that people talk about). I actually enjoy the sore feeling after. What I hate, and what I think probably caught up with me in that weird Day 2 & 3 space is that I need the run to get my brain moving.

I like the calculation of running for a length of time vs walking for a length of time. I like how lost in the music I get. Running is something that I know intimately and have done for most of my life. I  think I need it to boost my confidence because I’m doing so many things I don’t know. So, I’m going to add in 10-15 minutes of it on leg day because that’s what I need.

I discovered that my gym doesn’t have kettlebells so there were two exercises I couldn’t do but y’all – I killed those dumbbell lunges that I struggled with on day two. And by killed I mean I actually did all of them. I didn’t necessarily do them well, but I did them.

Summary: Add in something familiar when you’re doing something new or else your confidence will be shot.

The number one thing I took away from this week is that I can’t frame it in terms of “good” and “bad.” I went to the gym. I went. That’s actually enough. If I had gone and walked on the treadmill for 10 minutes, that’s 10 minutes more than what I was doing before.

That’s it. There are 100 things in a day that I come across that I’m “not good” at. If I spent all my time thinking about them I would never leave my house. And if I told you each day about the 100 things I came across that I am “good” at, I would be the most annoying person ever.

So instead, I went. I went to the gym and I did these things that matter to me because they keep my heart healthy and help me manage stress.

Keeping it on those terms makes it easier to go and to keep going.

I did lose 1.6 lbs and I actually do think it’s important to talk about the number because the number connects to heart and whole-body health. But I don’t think I’ll weigh myself again until April 8 (the 30-day mark) because I have a history of caring too much about that number. You’ve got to know your limits, not just in the gym but out of it as well.

Oh! AND! I’m making this little playlist of the songs that are resonating with me the most each day if you want to follow along. It’s definitely made it more fun to have music to lean in to. 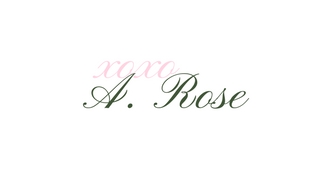